It is that time of year again for every brand to compete on social media for the Best April Fools’ Day Prank. Social media pranks are not only a great opportunity for businesses to increase brand awareness, engagement and grow their following across their channels, but it also adds personality and humanises their brand by resonating with their audience through humour.

However, pranks can be a potentially high risk and controversial if not done right. The results can vary from negative comments to loss of trust that could affect the brand’s entire reputation. Or worse, showing the world that their sense of humour just isn’t really that great.

To celebrate the season of prankvertising, we have ranked our top five best and worst pranks by brands on social media:

As a follow-up product to their range of wireless charging furniture, IKEA gifted us with the bathroom product that no one asked for. IKEA introduced its latest bathroom innovation back in 2016 which gained a positive response from their fans and a high volume of community engagement. No one fell for the gag, of course.

In 2017, Google Play decided that games are not just for humans. On April Fool’s Day, Google Play introduced a variety of interactive games on their app store as a handy solution for all lonely and bored pets at home.

Everyone remembers the historical moment when Instagram copied Snapchat’s Stories feature. So, in response to the whole ordeal, Snapchat gave Instagram a taste of their own medicine by replicating Instagram’s interface as a Snapchat Filter for a day.

Another pet-related prank was planted last year by Frank Body when they fake launched an exfoliating body scrub for dogs. Whilst Frank and his social media team had the last laugh and gained a high number of social traction, many loyal customers ended up wishing the product existed.

Moleskine is known for their range of luxury notebooks, planners and journals. But what if your premium stationery doubled as a charging station for your phone? No one fell for this gag but it did receive a good response from their audience.

In 2017, KFC released a promotional video about their fake smart home product: a voice-activated chicken bucket. KFC is known for pulling many pranks on social media, so the results left audiences angry, confused and criticising the fast-food chicken brand for being predictable and lacking a punchline.

This one is a big YIKES for us. In 2015, Save The Children UK – an organisation that promotes children’s rights and supports children in developing countries, decided that a fake announcement to extend their help towards animal rights would be a good idea. Not only did the prank not receive a high volume of engagement, but it was also poorly received. The joke was in bad taste with one user leaving a negative comment stating their disappointment for the organisation and that they almost considered donating.

Source: Save The Children UK

If you use Duolingo to redeem yourself from how badly you did in French class, then you might enjoy Brewolingo, a fake brewery designed to help you learn a language through drinking craft beers. Should we be giving props for promoting alcoholism? The idea wasn’t too bad but we would file this under “Mediocre Pranks That Are Off-brand”.  However, we do give points for this beautiful landing page and packaging design.

There’s nothing wrong with this prank. We’re just disappointed it’s not true.

And last but not least, one of Google’s biggest downfalls was the Mic Drop Feature of 2016. Technically not a social media prank but a prank gone wrong nonetheless. Gmail launched its feature option on Gmail for April Fool’s Day which replaces the Send+Archive button with a GIF attachment of a minion dropping a microphone. As if minions weren’t bad enough. The prank left Gmail users angry as it resulted in many emails being left with a tasteless out-of-context joke.

Google apologised and retracted the feature after its awkward backlash, claiming they ironically pranked themselves that year. We’re filing this one under “a small victory for Outlook users”.

I can’t believe how short-sighted Gmail’s “Drop Mic” April 1 joke is. It replaces the “Send+Archive” button, and attaches GIFs to sent mail.

WHAT A HARMLESS APRIL FOOL’S JOKE, WHAT COULD GO WRONG pic.twitter.com/Maw8a6VUSA 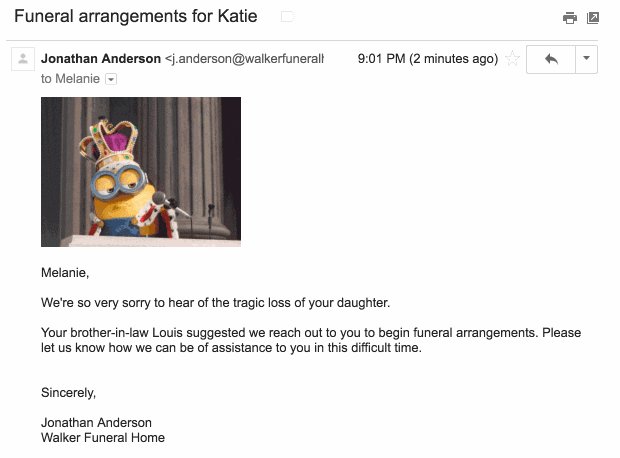 3,836 people are talking about this
Key Takeaways and Lessons for Making Your April Fool’s Day Prank:

This website uses cookies to improve your experience while you navigate through the website. Out of these, the cookies that are categorized as necessary are stored on your browser as they are essential for the working of basic functionalities of the website. We also use third-party cookies that help us analyze and understand how you use this website. These cookies will be stored in your browser only with your consent. You also have the option to opt-out of these cookies. But opting out of some of these cookies may affect your browsing experience.
Necessary Always Enabled

Any cookies that may not be particularly necessary for the website to function and is used specifically to collect user personal data via analytics, ads, other embedded contents are termed as non-necessary cookies. It is mandatory to procure user consent prior to running these cookies on your website.